Silicon versus Silicone: What do you need to know for product development?

Silicon and silicone are more than just a letter apart. Depending on your industry, you may be more familiar with one or the other, but both are important materials for the technology and consumer product development industries. At Creative Mechanisms, we primarily work with silicone, but in the interest of education, we’ll discuss the properties and applications of both. Let’s get started!

In short, the former is a naturally occurring metalloid, and the second is a synthetic polymer. Silicon is a common element that was first isolated early in the 19th century by the Swedish chemist Berzelius. It is a metalloid with characteristics similar to both metals and nonmetals and it makes up more than a quarter of the earth’s crust where it often combines with oxygen and other elements and typically appears as a dust or sand. Silicon gained international attention based on its importance to the semiconductor industry (for which it is a critical component). Perhaps the key to its relevance is the manner in which its conductivity can be closely controlled. Silicon’s conductivity increases with temperature but it is often “doped” or treated with other elements which predictably alter its electrical response.

There are various types of silicones, which are also known as polysiloxanes. A siloxane is composed of alternating oxygen and silicon atoms, and polysiloxanes are polymers of inert compounds composed of multiple siloxanes. While silicones have silicon atoms, they also have carbon, hydrogen, and various other atoms as well. Polysiloxanes (or silicones) are typically rubbery and heat resistant materials, and as such they are used as lubricants, adhesives, sealants, and insulators. 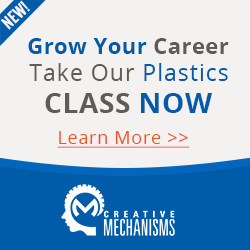 What About Using Silicone For Prototypes & Consumer Products?

At Creative Mechanisms we typically work with silicone in the form of “polymerized siloxanes” which is a fancy word for any type of material formed from the combination of Silicon and Oxygen (Siloxanes) in a chain. Siloxanes are typically rubbery and heat resistant materials and as such they are used as lubricants, adhesives or sealants, insulators, and in our case, most recently as an eating utensil for children. Check out our latest creation: a silicon feeding and teething spoon that doubles unintentionally as a tongue brush. Yes, polysiloxanes (silicones) are used in a lot of consumer products and are generally believed to be safe when used under normal circumstances.

How Do You Make A Prototype With Silicon (Specifically Polymerized Siloxanes)?

Polymerized Siloxane prototypes are typically made by following this basic sequence of steps:

Rather than casting a mold from a master part, we CNC machine the mold from polycarbonate, or 3D print one in ABS. This allows us to more easily customize the mold with fixturing features, air vents for better filling, multiple-part molds (several cavities), and reservoirs for material shrinkage. Using this approach, we inject the silicone with a syringe rather than pour into the mold. The clear polycarbonate allows us to see what is going on.

This process, somewhat simplified, is all there is to the product development process for silicone-based prototype parts. For more information on this and other projects please reach out to Creative Mechanisms by clicking the button below.