Plastics are everywhere around us, but how much do you actually know about them? Let’s take an in-depth look at this incredibly important, abundant material. We’ll discuss how they are created, identified, and categorized. 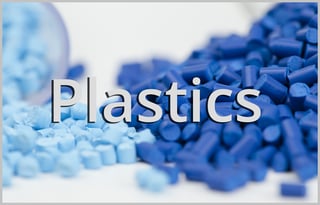 What is a Plastic?

Plastics are synthetic materials that originally derive from organic products such as hydrocarbon fuels (coal, natural gas, and crude oil), salt, sand, and a number of other possible constituents. Production begins with the processes of distillation and cracking in an oil refinery in which fractal groups of successively lighter hydrocarbon compounds are separated from the aggregate of raw material. Of particular interest to the plastic industry is a range of refined hydrocarbon distillates known collectively as Naphtha and used as key contributors in the manufacturing process for plastic polymers (examples include ethylene C2H4, propylene C3H6, and butene C4H8).

How are Plastics Created?

Most plastics are created in one of two major processes: polymerization or polycondensation - sometimes known as chain growth and step growth polymerization respectively. In both cases, petroleum distillates are combined with specific catalysts to create novel, typically larger, molecules. Both processes occur in a reactor where heat is added causing small molecules to combine into larger ones (known as plastics). The resultant large molecules have unique properties depending on the specifics of the process. Want a more in-depth explanation? Read below to understand the chemistry behind the creation of plastics.

How are Plastics Identified?

Plastic polymers have unique properties depending on their final structure, size, and the particular monomer constituents they are made from during production. They are classified in several ways:

Categorization as either a thermoplastic or a thermoset has to do with the way the plastic, once created, responds to heat.

Categorization as a homopolymer or a copolymer has to do with the monomer make-up of the final material. A monomer is smaller molecule that binds to other small molecules (other monomers) to make a larger molecule (polymer). Think of monomers as the simplest repeating unit (small molecule) in the makeup of a larger molecule. If the final plastic is made from a single type of monomer then it is classified as a homopolymer. If the plastic is made from a combination of two or more different types of monomers then it is classified as a copolymer.

Plastics are used virtually every day by much of Earth’s population. They have a diverse range of applications across a vast number of industries. In the prototype design, manufacturing, and injection molding industry we interact with plastics on a daily basis. Some plastics are useful for engineering purposes (the engineering plastics), while others are readily available in manufacturing, or are easily machined or 3D printed. Availability and feasibility of use throughout the design and development process, in addition to suitability for use in the final product, can have a significant impact on the plastic you choose for your products.

Have some questions or need a plastics recommendation? Contact us today!

Bonus: What’s The Chemistry Behind The Creation of Plastics (For Those People Who Want A More In-Depth Explanation):