How PIMT Is Changing The Landscape For Injection Mold Tools 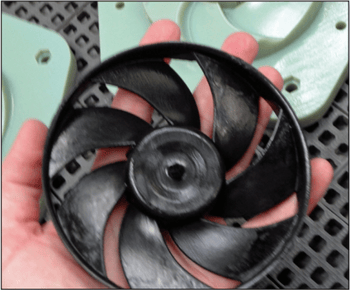 What does PIMT stand for?

PIMT stands for Printed Injection Mold Tool (PIMT). It is a novel methodology being introduced as a possible way to replace steel and/or aluminum tooling for injection molding (IM) prototyping processes. The purpose of this article is to discuss PIMT technology and to identify applications where it presently makes sense in comparison to other alternatives for IM tooling. We will also discuss where PIMT technology might make sense in the future depending on technological advances, and where it does not make sense relative to the alternatives presently available.

What is the current standard for Injection Mold Tooling?

Injection molding is typically used for manufacturing large volumes of material (mass-production of parts). For such purposes, injection molding machines use aluminum and/or steel molds (a.k.a. “tooling”).

The steel tooling fits into the injection molding machine and is used repeatedly to produce tens of thousands of parts - typically but not necessarily made from plastic. Steel is useful for this purpose because it has a much higher melting temperature (roughly 1370 degrees Celsius or 2500 degrees Fahrenheit) than the plastic parts being created in the tool cavity (which typically have melting points around several hundred degrees Celsius). The large dichotomy between steel’s melting point and that of common IM plastics means that it holds up very well over time.

Other options for IM tooling include Direct Metal Laser Sintering (DMLS), resin casting, and now Polyjet PIMT technology. DMLS is a type of 3D printing where metal powders are turned into a solid through sintering (heating the material to a point that it fuses without becoming liquid). DMLS holds up fairly well in IM manufacturing relative to resin casting and PIMT because the tool material is metal. It is much less robust than a steel tool produced from conventional steel CNC milling/tooling production, however. This is from the crystalline properties that develop when steel is melted and cured, as opposed to being sintered via a powder. Resin casting is less robust still and holds up depending on the properties of the synthetic resin being cured. Similarly, the effectiveness of PIMT depends much on the plastic being injected during the molding process.

What are the advantages and disadvantages of PIMT tooling relative to the alternatives?

How many parts can be made with different tooling alternatives?

The number of parts that can be created is different based on the material being used for the mold.

Conventional Metal Tooling (via CNC): Steel and aluminum tooling (typically created from machining solid blocks on a CNC machine) can easily create 10,000 parts for any plastic that is used in manufacturing - it doesn’t matter.

DMLS Metal Tooling: Metal tooling that is created through Direct Metal Laser Sintering (DMLS) has considerably different utility depending on the material being used in injection molding. For example, a DMLS produced mold might last for 10,000 parts if the final material is something like PE, PP, PS, ABS or TPE’s (low melting point plastics). By contrast, DMLS tooling may only last for 100 cycles for materials like PC+G, PPO and PPS (higher melting point plastics and/or copolymers).

Polyjet PIMT Tooling: Printed Injection Molded Tool technology is likely to deform after only 10 cycles making it a poor fit for demanding IM materials. The utility of different mold technologies over time really depends on the material the tooling is made out of, the material the final parts are made out of, and how many parts are desired by the client. How close the thermal properties are to one another will dictate tooling life and the number of parts that can be created with a single mold. Tooling with significantly more robust thermal properties (higher melt temperatures) than the part material will last much longer than those with properties closer to the part material.

The Effect of Part Material Used In Injection Molding

Stratasys provides a good demonstration video of PIMT tooling being used to create a plastic propeller part using injection molding. You can view the video here. The example they provide uses ABS plastic as the PIMT tooling material and Polyoxymethylene (POM, a.k.a. “Acetal”) as the injection molding part material. The melting point of POM depends on whether it is a homopolymer (single material) or a copolymer (multiple materials mixed). In either case the melting point falls somewhere between 162 and 175 degrees Celsius. The temperature for the injection molding process was 210 degrees Celsius at 300 bar. Other specifications provided in the video include the following:

While the part is successfully produced, it is important to recognize that Stratasys’ own data indicates that such a process (in this case using an ABS plastic PIMT tool to create POM, class “B” injection molded parts) would only last between 10 and 100 cycles before the printed tool becomes unuseable. If there was no need to create more than 100 parts then the advertised savings are legitimate and as follows:

Time Savings of 700-1800% and Cost Savings of 43% over aluminum and 72% over steel (based on price proposals from two different metal tool makers and the assumption that a new PIMT tool does not need to be created).

PIMT would be useful for prototype injection molding production where only a smaller number of parts are required (e.g. five to 100) and the material they were created from was not critical. According to Stratasys, PIMT is best fit with thermoplastics that have a molding temperature < 300 °C (570 °F). The best material candidates identified were ABS, PA, PC-ABS, PE, POM, PP, PS, TPEs, and glass filled resins used for the creation of moderately sized parts. PIMT technology is very much limited by the material the printed insert is made from in that it likely will not sustain repeated high temperatures without deformation as is the case with steel tooling. An interesting potential application of PIMT technology would be to retrofit a generic steel tool with 3D printed inserts. The same limitations apply, however, for prototype shops interested in small scale manufacturing of a part in certain materials; it would allow them to create the parts without having to CNC a complicated steel tool.

To learn more, please visit our blog and resources section!

*Charts and feature image from Stratasys