Everything You Need To Know About PVC Plastic

What is Polyvinyl Chloride (PVC), and What is it Used For?

Polyvinyl Chloride (PVC) is one of the most commonly used thermoplastic polymers worldwide (next to only a few more widely used plastics like PET and P.P.). It is naturally white and very brittle (before the additions of plasticizers) plastic. PVC has been around longer than most plastics, first synthesized in 1872 and commercially produced by B.F. Goodrich Company in the 1920s. By comparison, many other common plastics were first synthesized and commercially viable only in the 1940s and 1950s. It is used most commonly in the construction industry and is also used for signs, healthcare applications, and fiber for clothing. PVC was accidentally discovered twice, once in 1832 by French chemist Henri Victor Regnault, and then rediscovered in 1872 by a German man named Eugene Baumann.

Check out the industry's best online course for new inventors. Lean on veteran guidance to help take your product from initial idea to profitable product.

The Base Forms and Functions of Polyvinyl Chloride (PVC)

PVC is produced in two general forms: a rigid or unplasticized polymer (RPVC or uPVC), and the second as a flexible plastic. In its base form, PVC is characterized by its rigid yet brittle structure. While the plasticized version holds various uses across multiple industries, the rigid version of PVC also has its share of uses. Industries such as plumbing, sewage, and agriculture can utilize rigid PVC across many functions.

Flexible, plasticized, or regular PVC is softer and more amenable to bending than uPVC due to the addition of plasticizers like phthalates (e.g., diisononyl phthalate or DINP). Flexible PVC is commonly used in construction as insulation on electrical wires or in flooring for homes, hospitals, schools, and other areas where a sterile environment is a priority. In some cases, PVC can act as an effective replacement for rubber. Rigid PVC is also used in construction as a pipe for plumbing and siding, commonly referred to by the term "vinyl" in the United States. PVC pipe is often referred to by its "schedule" (e.g., Schedule 40 or Schedule 80). Significant differences between the schedules include things like wall thickness, pressure rating, and color. 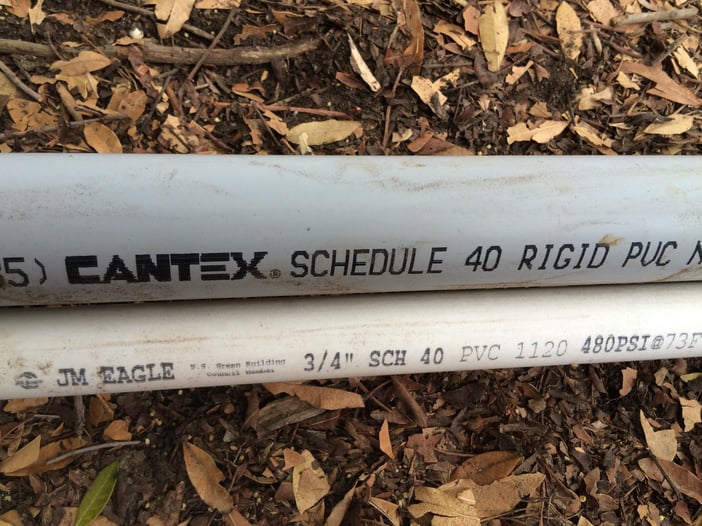 Some of PVC plastic's most important characteristics include its relatively low price, its resistance to environmental degradation (as well as to chemicals and alkalis), high hardness, and outstanding tensile strength for plastic in the case of rigid PVC. PVC remains widely available, commonly used, and easily recyclable (categorized by resin identification code "3").

What are the Characteristics of Polyvinyl Chloride (PVC)?

Some of the most significant properties of Polyvinyl Chloride (PVC) are:

Polyvinyl Chloride is a "thermoplastic" (as opposed to "thermoset") material, which has to do with the way the plastic responds to heat. Thermoplastic materials become liquid at their melting point (a range for PVC between the very low 100 degrees Celsius and higher values like 260 degrees Celsius depending on the additives). A primary useful attribute about thermoplastics is that they can be heated to their melting point, cooled, and reheated again without significant degradation. Instead of burning, thermoplastics like polypropylene liquefy allows them to be easily injection molded and then subsequently recycled. By contrast, thermoset plastics can only be heated once (typically during the injection molding process). The first heating causes thermoset materials to set (similar to a 2-part epoxy), resulting in a chemical change that cannot be reversed. If you tried to heat a thermoset plastic to a high temperature a second time, it would only burn. This characteristic makes thermoset materials poor candidates for recycling.

Why is Polyvinyl Chloride (PVC) used so often?

PVC offers a wide variety of applications and advantages across multiple industries in both its rigid and flexible forms. In particular, Rigid PVC possesses a high density for plastic, making it extremely hard and generally incredibly strong. It is also readily available and economical, which, combined with most plastics' long-lasting characteristics, makes it an easy choice for many industrial applications like construction.

PVC has an extremely durable nature and lightweight, making it an attractive material for construction, plumbing, and other industrial applications. Additionally, its high chlorine content makes the material fire-resistant, another reason why it has gained such popularity across various industries.

What Are The Different Types of PVC?

Polyvinyl Chloride is widely available in two broad categories: rigid and flexible. Each type comes with its own set of advantages and ideal uses for different industries. Flexible PVC can act as electrical cable insulation and a rubber alternative. Rigid PVC has various uses in construction and plumbing, providing a lightweight, cost-effective, and durable material to use.

How is PVC made?

Polyvinyl Chloride is made from one of three emulsion processes:

Two main issues are working with PVC that makes it relatively problematic and not generally recommended for use by non-professionals. The first is the emission of toxic and corrosive gases when melting the material. This happens to some extent or another while 3D printing, CNC machining, and injection molding. We recommend taking a look at the MSDS data sheets for different chlorinated hydrocarbon gases like chlorobenzene and discussing the production process with a professional manufacturer. Second is the corrosive nature of PVC. This is problematic when PVC is repeatedly coming into contact with metal nozzles, cutters, or mold tools made from a material other than stainless steel or some other similarly corrosion-resistant metal.

Polyvinyl Chloride is available in filament form as a plastic welding rod (the material used for welding), but it is not presently retrofit for specific use in 3D printing. Although there are a growing number of plastics and plastic substitutes available for 3D printing, by far, the two most common are still ABS and PLA. At Creative Mechanisms, we typically 3D print with ABS. For a list of reasons why and compare the two most common 3D printing plastics (ABS and PLA) for 3D printing, read here.

The biggest issue with PVC for 3D printing is its corrosive nature (potentially compromising typical machines' functionality if it were used over a longer period). An interesting kickstarter developed a PVC capable 3D printing nozzle (extruder head) put forward by engineer and entrepreneur Ron Steele that unfortunately closed without enough interest in 2014. You can take a look at the introductory pitch (video) here:

Polyvinyl Chloride can be cut on a CNC machine, but any machinist who has tried has probably experienced degradation in the cutter depending on the material it is made. PVC is corrosive and abrasive, and cutters that are not made from stainless steel or a comparably corrosive resistant material are likely to deteriorate over time.

Polyvinyl Chloride can be injected just like other plastics, but chlorine in the material complicates the process. This is because melted PVC can give off a corrosive, toxic gas. Accordingly, shops need to be equipped with good ventilation systems. Those that aren't are likely to be hesitant to work with the material. Additionally, unique corrosive resistant materials like stainless steel or chrome plating are required for the mold tool when injection molding PVC plastic. Shrinkage in PVC tends to be between one and two percent. It can still vary based on several factors, including material durometer (hardness), gate size, holding pressure, holding time, melt temperature, mold wall thickness, mold temperature, and the percentage and type of additives.

PVC can pose a health hazard when burned as it emits hydrogen chloride (HCl) fumes. In applications where the likelihood of fire is high, PVC free electrical wire insulation is sometimes preferred. Fumes can also be emitted when melting the material (such as during prototyping and manufacturing processes like 3D printing, CNC machining, and injection molding). We recommend taking a look at the Material Safety Data Sheets (MSDS) for different chlorinated hydrocarbon gases like chlorobenzene and discussing the production process with a professional manufacturer.

What are the Advantages of Polyvinyl Chloride?

PVC provides industries with a series of critical advantages that have cemented its place as one of the most popular and widely used plastics on the market. These advantages include:

PVC's advantages helped solidify its place as one of the most used plastics around the world. However, even though it's widely effective and popular, you have to consider some factors when using the material.

What are the Disadvantages of Polyvinyl Chloride?

While PVC has a host of advantages that make it a desirable material to work with, there are some reasons to take caution. The disadvantages that you have to account for when using PVC include:

What are the properties of Polyvinyl Chloride?