Everything You Need To Know About Polycarbonate (PC)

What is PC, and What is it Used For?

Polycarbonate (PC) plastics are a naturally transparent amorphous thermoplastic. Although they are made commercially available in a variety of colors (perhaps translucent and perhaps not), the raw material allows for the internal transmission of light nearly in the same capacity as glass. Polycarbonate polymers are used to produce a variety of materials and are particularly useful when impact resistance and/or transparency are a product requirement (e.g. in bullet-proof glass). PC is commonly used for plastic lenses in eyewear, in medical devices, automotive components, protective gear, greenhouses, Digital Disks (CDs, DVDs, and Blu-ray), and exterior lighting fixtures. Polycarbonate also has very good heat resistance and can be combined with flame retardant materials without significant material degradation. Polycarbonate plastics are engineering plastics in that they are typically used for more capable, robust materials such as in impact resistant “glass-like” surfaces.

Another feature of polycarbonate is that it is very pliable. It can typically be formed at room temperature without cracking or breaking, similar to aluminum sheet metal. Although deformation may be simpler with the application of heat, even small angle bends are possible without it. This characteristic makes polycarbonate sheet stock particularly useful in prototyping applications where sheet metal lacks viability (e.g. when transparency is required or when a non-conductive material with good electrical insulation properties is required).

What are the Characteristics of Polycarbonate?

Now that we know what it is used for, let’s examine some of the key properties of Polycarbonate. PC is classified as a “thermoplastic” (as opposed to “thermoset”), and the name has to do with the way the plastic responds to heat. Thermoplastic materials become liquid at their melting point (155 degrees Celsius in the case of Polycarbonat). A major useful attribute about thermoplastics is that they can be heated to their melting point, cooled, and reheated again without significant degradation. Instead of burning, thermoplastics like Polycarbonate liquefy, which allows them to be easily injection molded and then subsequently recycled.

Polycarbonate is also an amorphous material, meaning that it does not exhibit the ordered characteristics of crystalline solids. Typically amorphous plastics demonstrate a tendency to gradually soften (i.e. they have a wider range between their glass transition temperature and their melting point) rather than to exhibit a sharp transition from solid to liquid as is the case in crystalline polymers.Lastly, Polycarbonate is a copolymer in that it is composed of several different monomer types in combination with one another.

Why is Polycarbonate used so often?

Polycarbonate is an incredibly useful plastic for applications requiring transparency and high impact resistance. It is a lighter alternative to glass and a natural UV filter, so it is often used in eyewear. At Creative Mechanisms, we have used Polycarbonate in a number of applications across a range of industries. A few examples include the following:

We have seen tinted PC used for the purposes of reducing glare (for example to cover lighted signs on the highway). Companies that manufacture this type of product often put tinted Polycarbonate on the front of their signs to both protect the LEDs and to reduce glare.

What Are The Different Types of Polycarbonate?

According to AZO Materials, polycarbonate was concurrently developed in the middle 20th century by GE in the United States and Bayer in Germany. In the modern era it is manufactured by a large number of firms, each typically with their own production process and unique formula. Trade names include well known variants (or “resins”) like Lexan® by SABIC, or Makrolon® by Bayer MaterialScience. You can view a full list of material manufacturers here.

How is PC made?

Polycarbonate, like other plastics, starts with the distillation of hydrocarbon fuels into lighter groups called “fractions” some of which are combined with other catalysts to produce plastics (typically via polymerization or polycondensation). You can read about the process in more depth here.

PC for Prototype Development on CNC Machines and 3D Printers:

PC is available in sheet stock and round stock, making it a good candidate for subtractive machining processes on a mill or lathe. Colors are usually limited to clear, white, and black. Parts that are machined from clear stock usually require some post processing to remove tool marks and to restore the transparent nature of the material.

Because Polycarbonate is a thermoplastic material, certain 3D printers are able to print with PC using the FDM process. The material is purchased in filament form and the 3D printer heats and deposits the filament into the desired 3D shape. PC for 3D printing is usually limited to a white color. PC/ABS blends are also available for 3D printing on an FDM machine.

There is a potential that certain types of polycarbonate could be hazardous in food contact situations due to the release of Bisphenol A (BPA) during hydrolysis (degradation due to material contact with water)1. The most commonly made types of polycarbonate are created by the combination of BPA and COCl2, however, there are BPA free polycarbonates that have become particularly marketable for applications involving perishable food or water.

There have been roughly 100 studies conducted on BPA and the results are somewhat controversial in that a correlation between funding source and risk assessment has been shown to exist. Most studies with government funding showed BPA to be a hazardous risk to health while many with industry funding showed lower to no medical risks. Regardless of the contradictory studies on the negative effects of BPA, certain types of Polycarbonate have been associated with its release. This has led to the advent of “BPA-Free” polycarbonate products (commonly shown on consumer products such as canning jars). 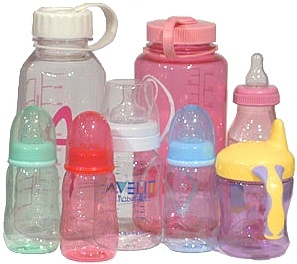 What are the Disadvantages of Polycarbonate?

Although Polycarbonate is known for its high impact resistance, it is very susceptible to scratching. For this reason, clear surfaces such as a polycarbonate lenses in a pair of glasses will typically be coated with a scratch-resistant layer for protection.

What are the Properties of Polycarbonate?