Prototype Injection Molding is a specialized capability that gets a lot of attention here at Creative Mechanisms. Here is a short review of the process and some information about injection molding in general.

Injection molding is the most common manufacturing method for plastics. When using this 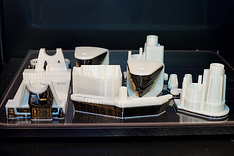 method, molten plastic is injected into a mold. The mold is two pieces; the pieces are held together with extremely high pressure – usually hydraulic – while molten plastic is forced inside. The plastic is cooled with water, the pressure is released, the mold opens up, and the part drops out. While some metals, like aluminum, can be used in injection molding, it's not very common, and Creative Mechanisms deals strictly in plastic.

Creative Mechanisms typically works with prototype injection molding. We consider there to be three levels of injection molding – prototype, pre-production, and mass production. We work on product design versus product production, which means that we create prototypes instead of saleable products. That line can get blurred, however, as a product gets introduced into the marketplace and starts to take off. We are looking at the design of the part and our clients often want to see the part in injection molded material instead of prototype material so the end result is identical to the manufactured part.

When a client comes to us with a new product concept we engineer it in 3D CAD software and produce either FDM printed or CNC cut prototypes. Which one we choose depends on the process that will best validate the design and engineering of the idea. If requested, Creative Mechanisms then produces injection molded prototypes to prove that the part will function the same way as the mass produced project.

Any time a printed or CNC cut prototype is needed, Creative Mechanisms makes an average of 3 to 4 prototypes per project. If the process moves on to injection molding, we make 300 to 1,000 parts. Tooling in general is a costly process. It is labor intensive and requires highly skilled toolmakers to machine the parts; Creative Mechanisms has 6 engineers that conceptualize the design, engineer it for manufacturing, and make the printed and/or CNC cut prototypes. Before a tool is started, a tooling engineer has to design the tool so that the mold cavity fills evenly, will be completely empty of air, and will cleanly eject the too.

For example: steel molds are called “tooling” and the term “cavitation” refers to the holes in the tooling – the cavities – into which the molten plastic is injected. Creative Mechanisms’s prototype tooling typically has only one cavity per part, whereas the mass production tooling will have many cavities per part to produce a higher volume at a lower cost.
As you might guess, the amount of time the process takes from the introduction of the idea through design, engineering, and prototypes is project dependent. The beginning stages through printed and/or CNC cut prototypes can take as a little as a couple of weeks. The injection molding procedure typically takes several months, but that too depends on the complexity of the product.

Once Creative Mechanisms is done with their portion of the project, the part goes on to be mass produced with injection molding. The client may use Creative Mechanisms’s prototypes for FDA trials or sales samples to sell the product. Sometimes we continue on with the same tooling to fulfill orders while the actual mass production tools are being made. This, however, is just a stopgap measure, because manufacturing must produce parts faster and far more cheaply than prototype tooling. Creative Mechanisms can take 30 seconds to a minute to make each part because we’re only making 300 parts and that time is negligible to us. When they’re making millions of parts, however, the difference between 15 seconds and 20 seconds is huge.