A Comparison of PLA with Other Commodity Plastics

Made from renewable resources, polylactic acid (PLA) is considered biodegradable. A lot of questions surround this type of plastic: Can PLA break down in natural composting conditions? Why isn’t PLA readily available on the market? Can I use PLA to make a biodegradable version of an existing product? Such questions got us thinking, and we decided to answer them ourselves through a series of comparative studies.

We decided to compare PLA to other frequently used, commodity plastics like polypropylene (PP), polystyrene (PS) and polyethylene terephthalate (PET) to see how durable and degradable PLA is in comparison. We used easily acquired testing samples: disposable cups manufactured in one of the four materials. Every commonly used plastic has its strengths and weaknesses which you can learn more about here.

The interior temperature of a parked car in direct sunlight can reach up to 130° F to 170°F. The car acts as a greenhouse and traps the heat. To mimic this environment, we put all four cups inside a laboratory oven set to 150 degrees for eight hours per day for three days. 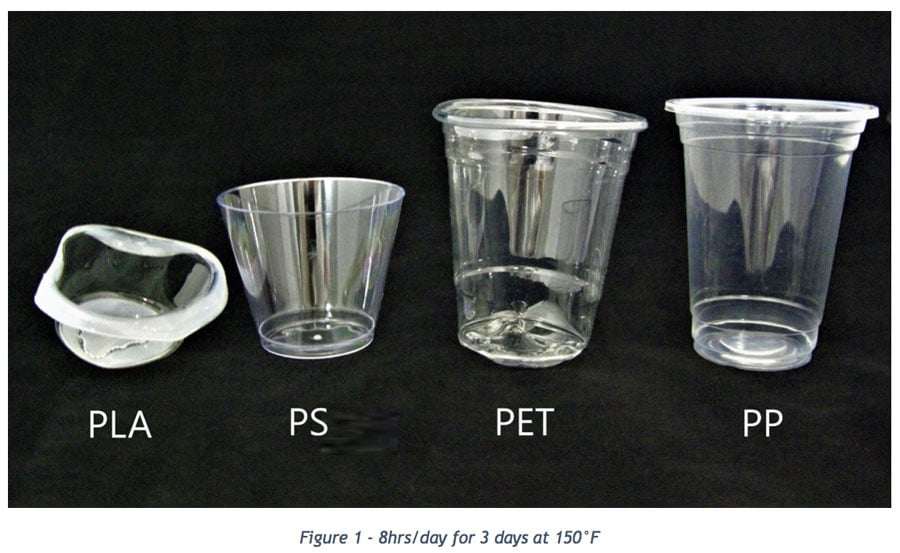 We also tested the cups at 170°F for about one hour (shown below in Figure 2). The PLA cup immediately shrank to less than half its original volume. The PET cup warped at the top and bottom. The PP and PS cups showed no response. (Note that the PS cup in this study is different than in our other tests; it is more of a bowl shape.) 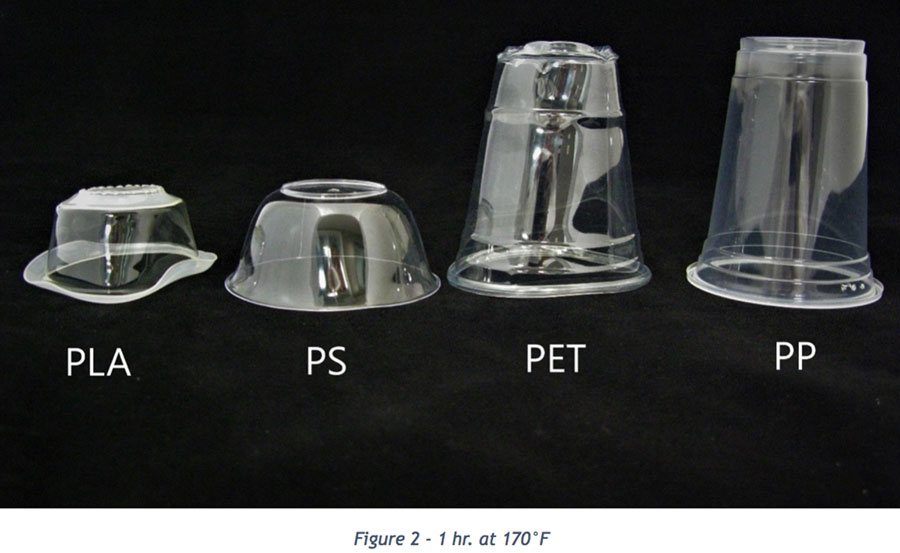 Most disposable coffee cups are made of paper lined with wax or polystyrene that can endure the heat of its contents. A fresh cup of coffee fresh from a Keurig can reach up to 192°F. As seen in the video below, when pouring hot coffee into PLA, it instantly deforms to less than half its initial volume. The PP, PS, and PET cups show little to no response. Regardless of the results below, we do not recommend using a thin walled disposable plastic cup for hot drinks like coffee. Commonly used as nail polish remover, acetone reacts differently to each plastic. We quickly dipped our cups into a bowl of acetone. In the picture below, both the PLA and PS cups turned opaque when dipped. The PP and PET cups also turned opaque, then gradually cleared over time. Other than turning opaque, only the PLA suffered additional change: it became soft and rubbery. (Note that the PS cup in this study is different than in our other tests; it is more of a bowl shape.) 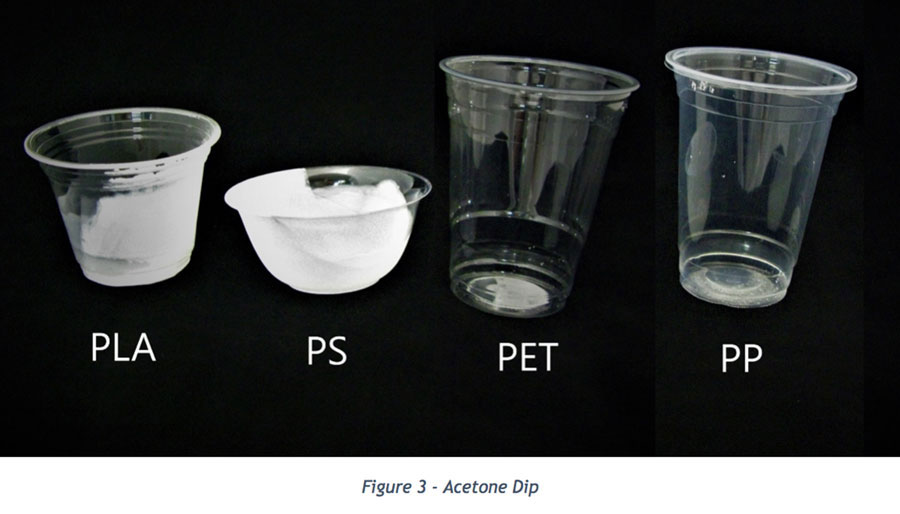 A microwave oven uses electromagnetic waves to heat food to about 212°F. The optimal microwave time can range from one minute for reheating to as high as five minutes to fully cook. The most frequently used microwavable plastic container is polypropylene, because it will not warp or melt due to its high glass transition temperature. 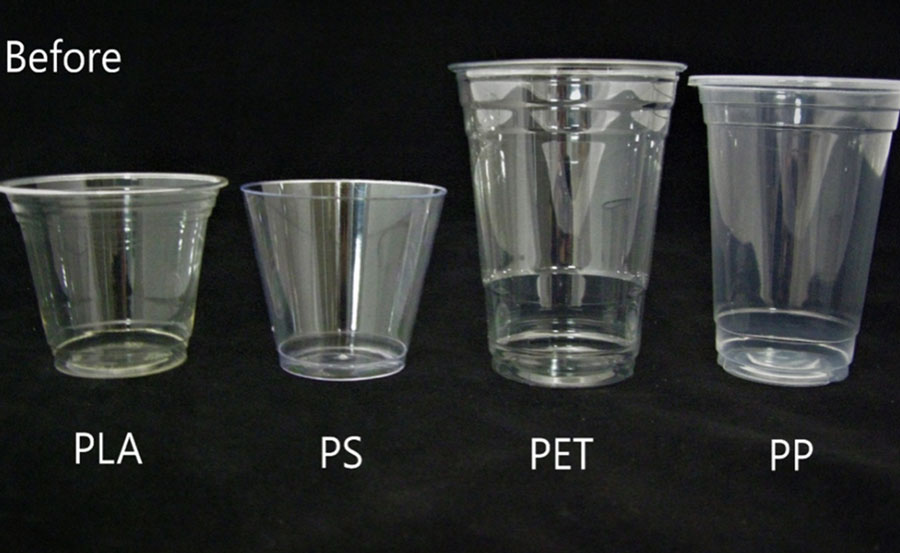 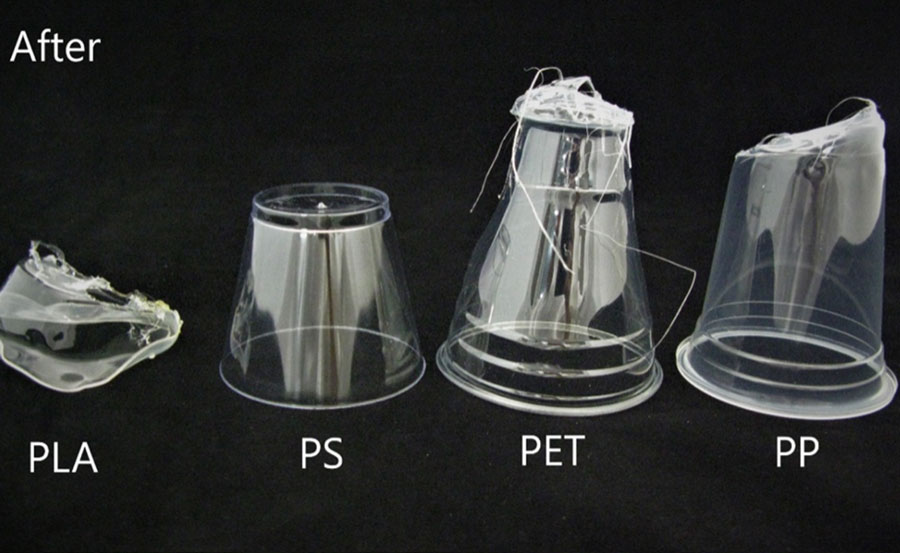 The heat deflection temperature (HDT) of a material is the specific temperature at which a material deforms under a quantified load. For this test, we placed each of the four types of plastic cups in the oven at four different temperatures. We set a 0.3 lb. metal block on top of each cup. The first test was conducted at a temperature of 150°F (Figure 5). Only the PLA showed any deformation. (Note that the PS cup in this study is different than in our other tests; it is more of a bowl shape) 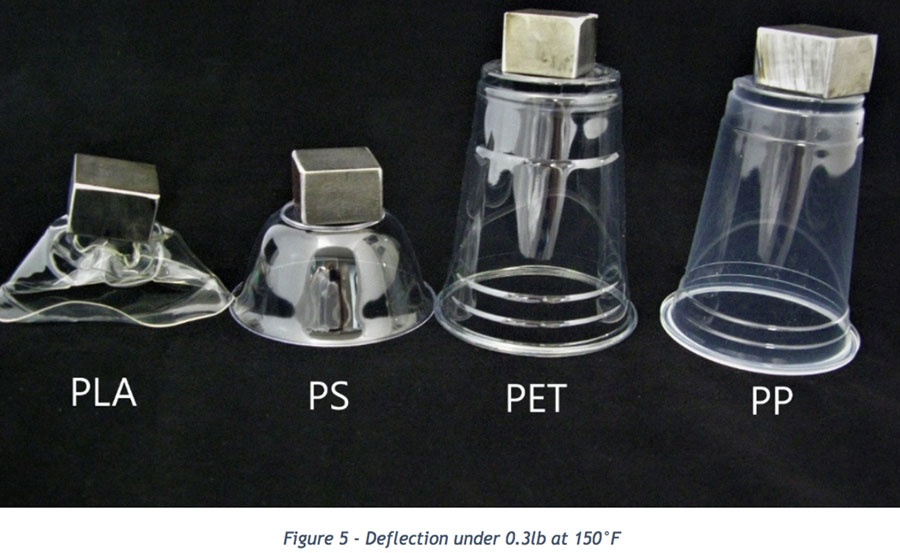 In the second test at 160°F, (Figure 6) the PLA cup completely flattened, the PS cup buckled and melted, and the PET cup melted at the top. The PP cup showed no response. 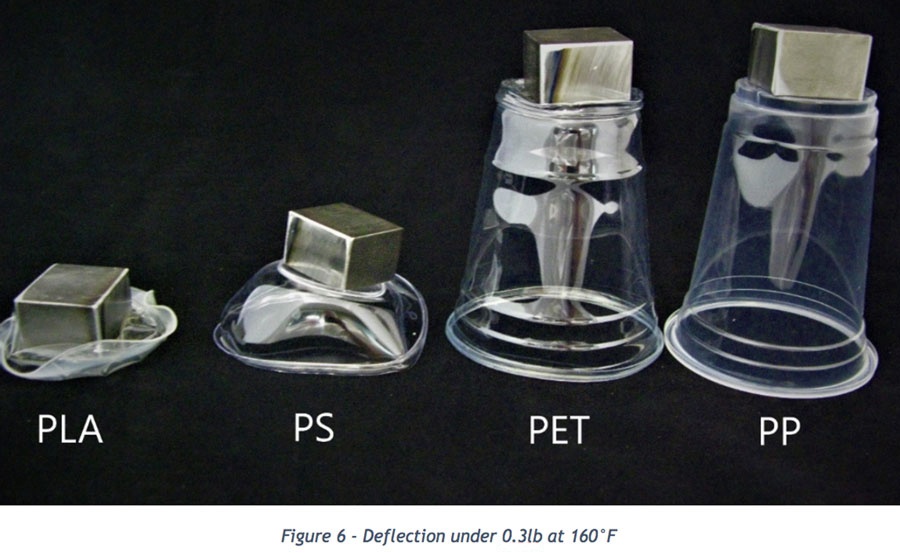 In the third test at 212°F (Figure 7), the PLA cup melted and flattened, the PS cup completely lost its geometry, and the PET cup buckled slightly at the top. The PP cup showed no response. 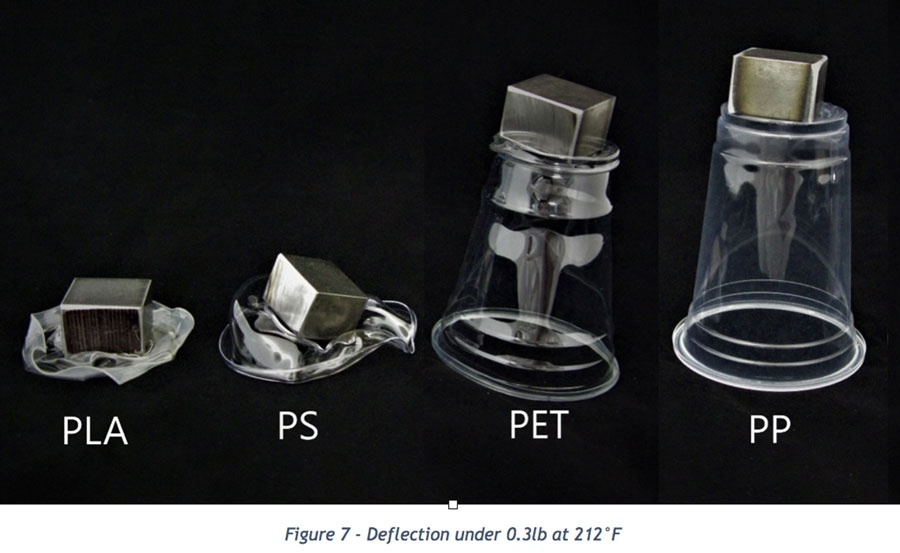 The fourth test was conducted at 284°F (Figure 8). Both the PS and PLA cup completely flattened and lost all of their initial geometry. Both the PET and PP cups started to warp and deform. 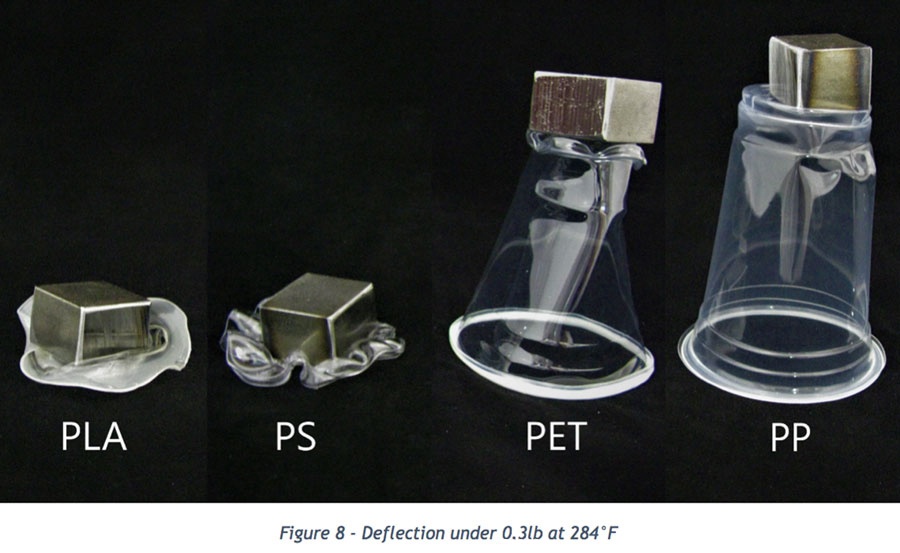 PLA continuously demonstrated its limitations throughout each exposure. Our test results confirm the supposition that PLA is not durable enough to be used in most consumer products. This leads to the question of how PLA will react to our long-term exposure tests subjecting the materials to direct sunlight, ocean water, soda, and natural compost. Stay tuned!