There have been two previous posts on mechanism design, which can be found (here) and (here). In this third and final part, we are looking at several more mechanisms that are useful in the plastic molding world: the gear and the ratchet mechanisms. 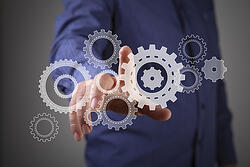 Gears are mechanisms that are used to transmit rotary motion or torque from one shaft to another. They are also capable of or converting rotary motion into translating motion as can be found in a rack. Gears are one of the most widely used mechanisms and therefore also one of the most useful ones. Two or more gears working in sync become a gear train and it can be considered a machine because there is work being done. The interaction between two gears creates a mechanical advantage that is less than, equal to, or greater than 1 as based on the ratio of the sizes of the meshing gears. The torque follows a proportional relationship between the gears, as do the relative gear sizes and the rotational speeds. The primary gear, which turns other gears, is known as the driver gear; the gears being turned are referred to as the driven gears. Other gears within the gear train between the input and output gear are called idler gears, as their role is just to transmit the torque or rotation.

There are a great many types of gears and gear configurations but we shall classify them according to the relative positions of the axes of revolution. By this classification, there are basically three types of gears: parallel, intersecting, and neither parallel nor intersecting.

These gear configurations are such that both the shafts are aligned parallel to each other and are perpendicular to the axes of rotation.

These gear configurations feature shafts that are not parallel to each other but are so arranged that if they were to be extended, they would intersect at a single point.

Gears for connecting neither parallel nor intersecting shafts

These gear configurations have shafts that are neither parallel nor intersecting.

Gears are very useful mechanisms and are not limited to the ones mentioned above. Some other types include: crown gears, magnetic gears, cage gears, harmonic gears, and others; each and every one of them have applications that are adaptable for plastic parts.

This mechanism is comprised of a wheel or rack with teeth. A rack with teeth is much like a gear but without interaction with another gear. They interlock with a driving pawl in such a way that the rotation of the wheel or translation of the rack is restricted to one direction. The driving pawl is attached to an oscillating lever, which governs the movement of the wheel or rack. Then, a supplementary pawl ensures that the motion is not reversed by wedging in place after every fraction of a turn or linear motion but otherwise will only slide over the teeth of the ratchet wheel or rack if it is moving in the correct direction.

Ratchet mechanisms have applications in simple forms, such as seat belt locks and fasteners as well as unusual forms like turnstiles.

This concludes our series of posts on mechanism design. The field of mechanism design is a really interesting one and there are virtually no limits to the ways each and every one of these mechanisms can be merged and made to interact with one another in order to create extremely complex and clever motions. The ingenuity and improvisation involved creating some mechanisms can be really breathtaking.