In part 1 of this series, we introduced the concept of mechanism design and explained why it is useful and 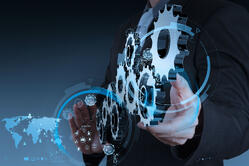 A spring is a mechanism that is able to absorb, store, and release energy as a result of its elastic properties. This elastic property allows it to deform, either as a result of compression or extension, and then return to its original dimensions – provided that a limit called the elastic limit is not passed. The elastic limit is when the extension or compression becomes permanent and failure occurs. Before this limit is reached, the extension or contraction of most springs is proportional to the force that is being exerted by the spring, which is articulated by Hooke’s law:

In this equation, F is the force exerted by the spring, x is the distance extended or compressed from the natural relaxed position of the spring or simply the displacement vector, and k is a constant known as the “spring constant.” The negative in the equation indicates that the displacement vector is always in the opposite direction of the force exerted by the spring. Hooke’s law applies generally to elastic materials or mechanisms that behave in an elastic manner; for springs specifically, the spring constant is derived by the formula:

In this equation, G is the shear modulus of the material, d is the wire diameter, D is the average spring diameter, and na is the number of turns.

Springs can be classified based on a number of criteria – geometry, how a load is applied to them, the type of force that the spring exerts when it releases stored energy, etc. For the purpose of conciseness, we will look at the most common types of springs and outline where they fall based on these criteria.

Extension springs are designed to resist a tensional load. It is made in such a way that the coils of the springs are tightly wound together so that there are no spaces between the coils when the spring is relaxed. It stretches when a load is applied to it.

Compression springs are essentially the opposite of extension springs, as they are designed to resist compressive forces and shrink upon being loaded. The coils are spaced apart; the distance between the coils determines how far it can be compressed from its relaxed position.

Torsion springs are different from both extension and compression springs in that the load they bear is not linear. The force is, instead, a twisting force, or torque. A torsion spring is designed to resist rotational force and is usually compact with both ends extended, which is where the load is applied.

Springs Constant force springs are unusual because they do not obey Hooke’s law. Instead, they deliver an almost constant force as they unwind from their coiled position. The spring is like a ribbon made of sheet metal that has been wound around a drum. They store and conserve energy extremely well and are usually used for delicate and precise applications. There are many other types of springs, but they are usually a combination of two or more of the aforementioned springs or a variation of the basic principles governing them. Examples are volute springs, negator springs, and mainsprings.

Cams are mechanisms that convert rotary, oscillatory, or sliding motions into reciprocating linear motions or vice versa. Cam mechanisms typically consist of two components – the cam and the follower, with the follower usually being fixed. Cams are known for their versatility and virtually any reciprocating motion can be achieved using them. Since cams produce reproducible and predictable movement, they are very useful in applications where automation and precision are important. Cams can be classified using a number of criteria, including the cam shape, the follower configuration, and the relationship between the input motion of the cam and the output motion of the follower.

Examples of cam mechanisms based on the shapes of the cams:

Examples of cam mechanisms based on the follower configuration:

Examples of cam mechanisms based on the relationship between input and output motion:

That concludes part 2 of this series. In part 3, we will take a look at some more mechanisms and how we can exploit them to our advantage.