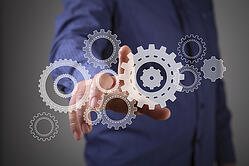 mechanisms. It is an extremely tricky subject because it is sometimes at odds with other design considerations, so a compromise must be reached to ensure that the final product is functional and satisfies all necessary criteria.

Before we can figure out the best way to design mechanisms, we first need to understand what a mechanism is. A mechanism is an interaction of rigid parts which are linked by joints in order to transmit, control, constrain, or translate motion and/or force from one part to another. Mechanisms are used in machines so that they can achieve their required function. Since a machine is basically anything that does work, it may be as simple as the opener for a tin of food or as complex as a giant telescope at an observatory.

Designing mechanisms is a very creative and experience based skill. There are literally millions of already established mechanisms and sometimes, it is just a matter of adapting an already established design to better suit one’s personal purposes. At other times, it is a matter of combining two or more mechanisms in order to achieve a required motion. Sometimes, however, the requirements of a part demand that we think outside the box to design a completely new mechanism.

Plastics can be molded to achieve most mechanism designs, but in some cases, they are made to work with other materials to achieve the product’s purpose. We shall now take a look at some of the most common mechanisms and look into how they work and how they can be useful, especially as related to injection molded plastics.

Levers are said to be the first machines ever designed and the working principle is one of the simplest to understand, but its applications can be more complex and are not as obvious. All levers consist of at least one rigid bar or rod that is pivoted on an axis, called the fulcrum. A lever can amplify input force to achieve a greater output force but to do this it has to sacrifice the distance over which this force is exerted. The ratio between the output force and the input force is known as the mechanical advantage (M.A.), and it generally gives you an idea of how effective a lever is. Remember, though, one of most basic laws of science: the Law of the Conservation of Energy, which says that energy cannot be created or destroyed, so one should not mistake the greater output of force to mean that this force is created out of thin air. In reality, the torque or movement about the fulcrum governs this natural power balance.

In this equation, τ is torque, f is force, and d is the distance from the fulcrum to where the force is applied. Since the torque is constant, we can manipulate the distance to increase the force and this is how the lever is useful. The input torque is equal to the output torque but the input force is different from the output force and the ratio between them is equal to the ratio between the input and output distances.

There are three different classes of levers and these classes are basically determined by the arrangement of the fulcrum, input force, and output force. Since a lever is a linear machine, there are only three possible arrangements, which are grouped into classes.

Class one (Fulcrum in the center)

This can be described as the classic lever. The fulcrum is in the middle, between the output force and the input force. It allows for the widest range of manipulation and the mechanical advantage may be less, equal, or greater than one. It may be equal because levers are not only useful for amplifying force, but also for changing the direction of force. Examples of class one lever applications are a pair of scissors, a crowbar, or a seesaw.

This type of lever features the output force in between the input force and the fulcrum. The input and output forces are thus on the same side of the fulcrum and the direction of both forces are always the same. This means that the distance of the output force is always greater than the distance of the input force and consequently the mechanical advantage is always greater than 1. The wheelbarrow is the most common example. Other examples are bottle openers and nutcrackers.

This is the least common of all levers because the mechanical advantage is always less than 1, which would seem to defeat the purpose of a machine. As we explained earlier, however, the purpose of a lever, especially as a mechanism, is not only to amplify or reduce force but also to transmit motion. As the input force is in the middle of the fulcrum and output force, it can never travel as much distance as the output force. The input force will also always be greater than the output force. A pair of tweezers or kitchen tongs are examples of class three levers.

In part two of this series, we shall take a look at some more mechanism types and how they can be manipulated to suit our engineering needs.