6 Different Mechanisms We Use Everyday

Engineering mechanisms are simple devices that make a huge difference in our day-to-day lives (often without us even realizing it). Here are six really important mechanisms we use nearly every day as we design functional prototypes for companies and individuals looking for creative solutions to business problems:

Actuators: Actuators are devices that convert some type of stored energy into motion. The stored energy is usually in the form of compressed air (pneumatic pressure), electrical potential, or liquid (hydraulic) pressure. Did you know? There are three principal types of actuators: electric, pneumatic, and hydraulic. Read more here.

Cams: Cams are mechanical devices that convert rotational motion into linear motion. You’re probably familiar with the use of “pear” cams for internal combustion engines but did you know there are infinite possibilities for cam design? Different designs result in different types of motion in the cam follower. Circular cams cause smooth linear motion, heart cams maintain a uniform velocity in the cam follower, and drop cams produce a rapid and discontinuous linear motion. Read more here.

Gears: Gears are one of the most common and diverse types of mechanical devices. Typically when you think of a gear you’re probably thinking about a “spur” gear (essentially a circle with teeth). The primary function of gears is to transmit torque and to adjust rotational velocity. Different types of gears include helical gears, worm gears, planetary gears, and bevel gears. Helical gears operate with less friction than spur gears while some worm gears (self-locking variants) allow for the transmission of motion in only one direction). Bevel gears translate rotation 90 degrees and are used as an integral part of vehicle drive trains. Perhaps the most interesting gear, however, is the planetary gear set. Planetary gears provide a diversity of options depending on which gear (the sun, planet, or ring gear) is held constant, which one is the drive gear, and which one is allowed to rotate freely. Read more here. 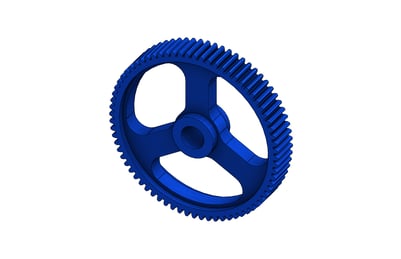 Levers: A lever is a mechanical device used to transmit and amplify force by fixing the input and output about a fulcrum or pivot point. There’s a great quote from the ancient Greek mathematician Archimedes that succinctly summarizes the foundational principle of levers: “Give me a place to stand, and I shall move the Earth with it [a lever].” Archimedes was referring to the law of the lever (M1d1=M2d2 where M is an object’s mass and d is the distance from the pivot point). With a long enough lever the Greek mathematician could infact move a mass the size of the earth just by standing on the other end (in theory at least). Read more here.

Ratchets: Ratchets are the handy-man and mechanic’s best friend. Anyone who has ever rented a UHaul to move between cities has probably used a ratchet to tighten down stored goods or to keep the wheels of their car strapped to the trailer. The neat thing about ratchets is that they lock in one direction allowing the user to tighten without fear of literally “going backwards.” Other cool day-to-day items that utilize ratchets include zip-ties and “ratchet” wrenches. Read more here.

Springs: Springs are mechanical devices that store and dissipate energy. Like gears there are a number of different types of springs. Amongst the most common are compression, torsion, leaf, and constant force. Did you know? There’s a theoretical type of constant force spring called a “zero-force” spring that would output zero force if it had zero length. Read more about springs here.