3D printing and injection molding aren’t really competing technologies so much as they are complementary. Both can theoretically be used for manufacturing and both can technically be used for rapid prototype generation. Although the trend for additive manufacturing processes (different types of 3D printing) is growing, most serious manufacturing is done with injection molding equipment while in most cases the 3D printer is a much more effective tool for rapid prototype development. 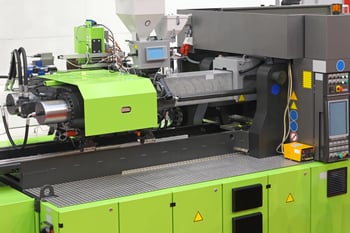 So what’s the difference between injection molding and 3D printing? The two processes are entirely different. In injection molding you are melting a molten material and injecting it into a large pre-designed cavity inside a steel tool (think of a steel box with an internal shape that matches the skeleton of your part). Injection molding machines are designed to keep the plastic melted while en route to the tool cavity and then to rapidly cool it once injected so that another round (cycle) can be accomplished.

There are different types of 3D printing that you can read about below, however, the most common type, Fused Deposition Modeling (FDM) also works by melting plastic. The difference between FDM and injection molding is that the molten plastic in an FDM machine is added one drop at a time in succession. The FDM machine follows inputs from a computer design file and essentially “prints” the part layer upon layer.

Ever wonder what the future holds in the world of manufacturing? Well one thing is for sure, 3D printing technology is advancing rapidly. There are a number of different types of 3D printers on the market. Amongst the most common types is the bread-and-butter tool at Creative Mechanisms, the Fused Deposition Modeling (FDM) machine. FDM is typically used for printing plastic parts. It works by melting a plastic filament that is fed through a heated nozzle. Molten drops of plastic are added one-at-a-time to build the prototype part. Other types of 3D printers include SLA, SLS, and SLM technology. SLA uses a laser to cure a resin material while SLS/SLM use a laser to melt successive layers of powder into a solid metal. You can read about them in more depth here.

Another initiative being pursued is the ability to print internal mold cavities for injection molding; a technology known as PIMT (Printed Injection Mold Tool). PIMT is an attempt to bypass the need to design an aluminum or steel injection mold tool. It is an interesting combination of the two technologies (3D printing and injection molding). The biggest limitation to PIMT technology are the material properties of the plastic material that is typically used in 3D printing. One solution to this is a Master Unit Dye (MUD) mold which uses a standard injection molding frame and a number of steel or aluminum inserts in order to define the shape of the internal cavity (and thus the eventual part). MUD inserts can be machined via CNC and are much more sturdy than PIMT because they are made out of metal. That said, PIMT is an attempt to essentially replicate MUD technology using the much more simple and cheap 3D printer.